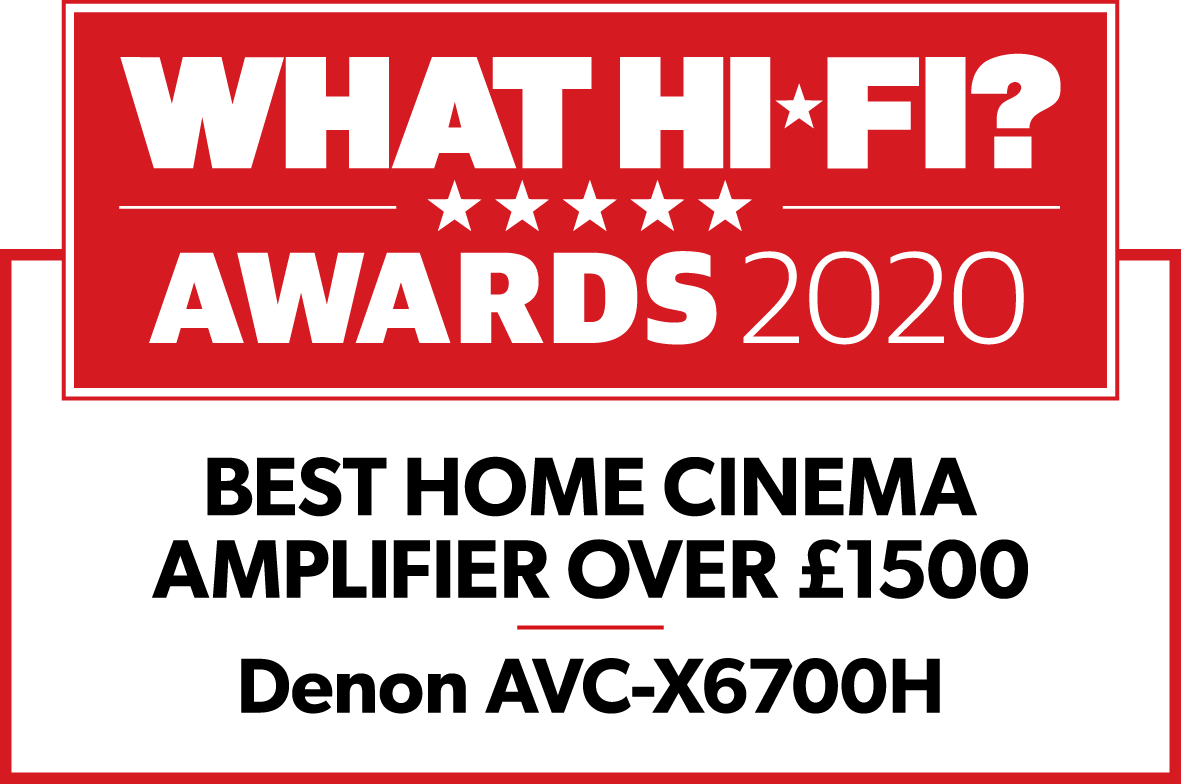 THIS PRODUCT IS NOT AVAILABLE ONLINE.
PURCHASE AT STORE ONLY.

With 8K compatibility plus the potential for 13-channel processing, the Denon AVC-X6700H delivers state-of-art home cinema.

Giving you fully immersive sound, this Denon lets you configure four ceiling or Atmos-enabled speakers as well as full 7-channel surround sound. Alternatively, use two Atmos speakers and enjoy a broad soundstage with ‘front wide speakers’ forming a 9.2.2 system. If you don’t fancy a Dolby Atmos specific system but want the most immersive sound possible, go for an 11.2 configuration. This offers 7.2 sound with the addition of front width and front height speakers.

If 11-channel sound’s not enough then why not extend to 13! Simply add an additional stereo power amp and enjoy the added immersion of 13-channel sound processing. This facilitates a 9.2.4 system, with four ceiling speakers and front width speakers combined. Alternatively, configure as a 7.2.6 system with six ceiling speakers – ideal for larger rooms.

The next level of surround sound

With wide-ranging surround sound support, the AVC-X6700H is all about immersive sound – however many speakers you use. Compatible formats include Dolby Atmos, Dolby Atmos Height Virtualisation Technology, DTS:X, DTS Virtual:X, DTS:X Pro*, IMAX Enhanced and Auro-3D. This huge range of options means you can adapt your surround sound speaker system from the simplest system with ‘virtual height’ speakers to full-blown 13.2 systems that truly bring the cinema home.

*Feature due via future firmware update.

Featuring 8K compliant HDMI sockets, this premium Denon AVC is ready for the next generation of TV. Not only does the amp pass through 8K/60Hz signals, but it also upscales HDMI signals to the 8K standard, too – helping you make the most of your 8K TV with 4K UHD media. If you’ve not yet made the jump to 8K TV, the sockets also handle up to 4K/120Hz signals, for the highest quality pass through and upscaling with 4K UHD.

As well as supporting 8K, the AVC-X6700H also supports a wide range of High Dynamic Range video formats. These include Dolby Vision, HDR10 and HLG. It also supports HDR10+, which enhances picture realism by sending dynamic Meta data to your TV, as well as Dynamic HDR. In short, whatever the format used by the film, game or stream, the Denon supports it.

Now works with all the voice assistants

The AVC-X6700 adds Siri and Google Assistant to Alexa, making it more widely compatible with voice assistants than before. For Alexa or Google Assistant control, simply download the HEOS app. Pair your Echo device if you’re using Alexa and you’re good to go – adjust the volume, skip to the next track and switch inputs simply by asking Alexa or Google. For control via Siri, simply link the amp via Apple AirPlay 2 and enjoy voice interaction and AirPlay 2 multi-room support.

The AVC-X6700H has no fewer than three HDMI outputs with an independent zone 2. This means you can run audio and video to another screen, in another room independently from the twin, main outputs. IP control capability for major third-party control devices, as well as Control4 SDPP (Simple Device Detection Protocol) certification plus twin DC triggers make this amp ideal for more complex home installations.

HEOS multi-room music systems connect together by dual-band Wi-Fi, making them easy to set up with your existing home network. Up to 32 HEOS units can be set up at one time, ensuring even the largest of homes are covered for multi-room music. With HEOS already built-in, the AVC-X6700H is ready to go as a single ‘zone’ without any further adaptors.

Control it all with the HEOS app

Once you’ve set up your HEOS speaker system, you can stream music effortlessly via the dedicated HEOS app. Available for Apple iOS and Android, the app not only lets you stream your stored music but also Internet radio services and popular streaming services such as Spotify, Tidal, Napster and Deezer.

Bluetooth, AirPlay 2, and built-in wi-fi for the complete networking experience

With both Bluetooth and AirPlay 2 connectivity it’s easy to connect all your smartphones, tablets and compatible lap/desktops and stream music wirelessly. The AVC-X6700H also comes with wi-fi and Internet radio. Simply connect to your home network via Ethernet or wi-fi and access thousands of Internet radio sites via vTuner as well as subscription services such as Spotify Connect (requires Spotify Premium account). A Bluetooth headphone output is now also standard.

Featuring Audyssey’s high-end MultEQ XT32 technology, the AVC-X6700H adapts itself to your room’s acoustics. The XT32 version of this automatic measuring and set-up device features include Audyssey Dynamic Volume, Dynamic EQ, LFC and SubEQ HT for total control. If you want to take this even further, purchase the MultEQ Editor App (at additional cost) and you’ve access to advanced user settings.

With such user flexibility, getting the perfect sound can be a complex business. For this reason, Denon has fitted the AVC-X6700H with four Quick Select audio presets. Take your time in setting the ideal sound balance for your TV, Blu-ray, games console and music source and recall them at the touch of a button for the ideal sound, instantly.

Experience the full intensity of music and movies, with the versatile Denon AVC-X6700H.