HDMI 2.1 is perhaps the most drastic change to the standard since its inception. While the physical layout of the cables and connectors are the same, the transport mechanism changes.

Its variable refresh rate combats gaming lag and stuttering through snappy frame transportation, allowing screens to display images faster. The Automatic Low Latency Mode feature triggers your display to switch into its fastest-response modes when a game is detected without any human input.

With so much bandwidth available, there’s more room in the pipes for raw data, too. HDR stands for High Dynamic Range, and it enables a broader range of colours in content like movies and games. Older HDR standards, like HDR10, only support static metadata. However, the newer HDR10+ and Dolby Vision formats allow for dynamic metadata on a per-scene or – frame basis.

Dynamic HDR provides a TV with more information about what to do with the signal it’s receiving. Rather than reading a single set of instructions for an entire movie, dynamic metadata gives the TV constant updates about how to tweak the image on-screen so it looks its best.

Moving forward, though, the HDMI 2.1 standard ensures plenty of bandwidth will be available for both metadata and high-resolution signals at high frame rates.

Another perk for next-gen console gamers is auto low latency mode (ALLM). Most TVs now include all kinds of additional processing to smooth out motion, improve picture quality, and even boost audio clarity. While some of this is appreciated when watching TV and movies, for gamers, it introduces latency (lag).

This is what Game mode is for—you can switch to this whenever you want the fastest possible response times from your TV. This is particularly handy for games that require fast, precise reflexes. The only problem is many TVs require that you turn Game mode on and off manually.

ALLM removes the need to do this. When your HDMI 2.1-compliant TV understands that you’re using a supported console, ALLM will disable any extra processing that might introduce lag. You don’t have to do anything at all to enable it—it’s baked into the HDMI standard.

Quick Frame Transport is another feature aimed at gamers that works in conjunction with ALLM to deliver a more responsive gaming experience. The feature prioritises video frames in a bid to keep latency as low as possible.

If you want to take advantage of this feature, make sure any intermediary devices, like a surround sound receiver, are also compatible. This will ensure all of your devices work together to deliver a smooth, responsive experience. If you’re routing your console via a receiver that’s only rated for HDMI 2.0, you won’t get the benefit of QFT, even if your TV and console support it.

Have you ever noticed that your screen goes black shortly before you watch a video or trailer? This is because the display is adjusting its refresh rate to suit the content you’re about to watch. As different content uses different frame rates, your display has to sync to it, hence, the short blackout.

Sometimes, this might cause you to miss the first few seconds of a video. However, some content providers delay playback to account for the change. Assuming the resolution of whatever you’re watching remains the same, Quick Media Switching (QMS) eliminates the blackout caused by refresh rate changes.

This allows you to watch content with differing frame rates back-to-back, without a blackout. The feature uses HDMI VRR to smoothly transition from one refresh rate to another.

ARC stands for Audio Return Channel. It allows you to send audio over HDMI to your soundbar or surround receiver without an additional optical audio cable. Whether you’re watching Netflix, playing a game on a console, or watching a Blu-ray, ARC ensures the audio is delivered to the right output.

Enhanced Audio Return Channel (eARC) is part of the HDMI 2.1 standard. Additional bandwidth available in HDMI 2.1 allows eARC to carry uncompressed 5.1, 7.1, and high-bit-rate. It’ll also carry object-based audio at up to 192 kHz in 24-bit resolution. It does this with an audio bandwidth of 37 Mbits per second, compared with under 1 Mbit per second via regular ARC.

If you want to carry a Dolby Atmos signal over HDMI, you’ll need eARC. There are also a few other enhancements, like proper lip-synch correction as standard, better device discovery, and a dedicated eARC data channel.

By purchasing a Certified HDMI Cable, you’re guaranteed that the cable meets a certain quality standard. This can only be achieved from stringent third-party testing and certified by HDMI Licensing. Ensuring that the cable supports for all HDMI 2.1 features. Such as uncompressed 8K at a 60Hz frame rate and 4K at 120Hz. The cable will also support up to 48Gbps.

Ultra High Speed HDMI Cables exceed the requirements of the latest international EMI standards to significantly reduce the probability of interference with wireless services such as Wi-Fi. mobile phones, network switches,, and other Bluetooth devices.

How Do I Know the Cable is Certified HDMI?

Additionally, the cable name must be printed directly on the protective cable jacket itself to signal the cable has been tested and certified to the HDMI 2.1 standard. 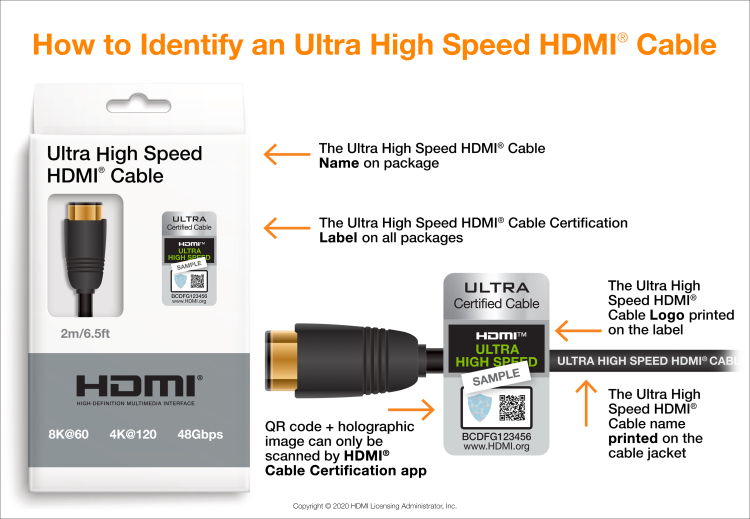 Accidents happen and unexpected pulls on your cable can cause a lesser HDMI cable to come loose or damage your device. Plus, thicker cables can weigh down the cable connector and pull it out of the socket over time. Even the slightest tension can result in signal loss.

Kordz’ Bravo cables feature solid diecast connectors with a 2Kg cable retention grading. Even strong external forces on the cable will be absorbed by its flexibility and premium connectors. This will maintain connectivity and device integrity while minimising potential damage.